Which Looks better to you? Nike (wilted) Studio Wrap vs Barreletics Performance Skin After Four Months of wear.

They all claimed to have the best grip so you could hold your pose in barre, yoga and pilates, but all fell apart when it came down to attempting side plank or flat back chair pose at the bar.   At that moment; in barre class and 6 months in to my practice the idea popped into my head - why don’t I create a Performance Skin in multiple colors thats stretchy and grippy and conforms to your foot like a second skin with all over grip and support that a Yoga Sock just can't offer!

Just like that the idea was born!  I had my first prototype that night after peeling a silicone sleeve off of a water bottle, cut it up to fit my foot and the very next morning I wore it to Barre Class.  I knew that I was about to create a Game Changer in the industry.  At that very moment I was going to create the Best Barre, Yoga and Pilates Sock on the Planet that would put all the others to shame!

Check out the Barreletics difference!

What customers are saying

I wear Pilates socks for 2 hours a day. I had become accustomed to the reformer straps slipping, the bar on the chair being an “almost” grip and the TRX handles rolling down to my ankles during planks. I thought it was just the way it had to be.

I saw these shoes and thought that they were too good to be true. OMG!!! The results are out of this world. Nothing slips! I can hold my plank without adjusting the handles, the chair bar during bridges held tight and the straps on the reformer were on spot. I tell EVERYONE that asks just how amazing these shoes are. I can’t wait to try them out in yoga!

These In-Studio Performance Skins are incredibly comfortable and have taken my Barre workouts to the next level…a game changer for me!

I am fairly new to barre and purchased some barre socks on line that were recommended by friends. As anticipated..I keep losing one sock when I put them in the laundry. The socks on hardwood floor are still slippery and don’t fit well as I have a super narrow feet…think of a really skinny hot dog and that it what my feet look like. I wear a 7.5 AAA and a medium fits perfectly.
I learned about barreletcs.com from an online barre class and decided I would try them out. They are well constructed and work well on hard wood floor and carpeting as it feels like they have padding under your feet. I wish I would have known about these earlier.
Finally, they come in fun colors. I am ordering a second pair and some for my friends. I feel like I have scooped my friends for finding these before they did. Thank you for making barre fun.

I will never wear a crappy barre sock again! this is the best barre shoe I have ever used and absolutely worth the price.
I am a 6.5 wide with flat feet and a lot of foot pain. I LOVE barre classes but I HATE the requirement of wearing barre socks, which (even if I get a small size) always slide around over my feet when I do lunges, curtsies, or second position, or really anything at all. I am always stopping to adjust them, put them back on my feet, regulating my movements so I don't slide out of them, etc. and worst of all, they're hot.
These barreletics are cool on my feet, letting them breathe. they are really cool looking and I love the blue. they provide so much grip I can really dig into deep lunges and positions. I couldn't believe how much better my first barre workout was with these new barreletics, how much more I could push myself. AND they actually have effective padding underneath, so the balls of my feet hurt much less while doing lunges and releve. so they actually helped my foot pain as well!
The only reason i'm taking off one star is because I believe they need a size small. I bought medium, and for the most part it is fine (and I will certainly be buying another pair). but they could be a little tighter and I do have to adjust them once or twice sometimes. but I will be buying these again, and I love that they are easy to clean. really wonderful, innovative product. Thank you!!

This footwear is awesome and the owner Stefanie is as kind, helpful and hard working as you can get. If you want to support a small business with American roots then this is a great place to start. I have a pair of each style and while o am hoping they extend their sizes to include xl the large gives me just enough coverage for martial arts,barefoot jogging, and going from street, to beach and back. Great person, great product, you have a fan in me!

Lewis Johnson
The Best Barre, Pilates & Yoga Workout Shoes
09/29/2021
Does almost everything you could want

As a martial artists and avid barefoot/minimalist footwear enthusiast I was immediately intrigued by this extremely unique footwear. So, like any smart consumer I looked up reviews and contacted the company directly. Little did I know that I would end up being in a conversation with the companies owner. Stefanie , on top of having a great product was patient and kind enough to recommend the size and color that would work best for me. Once I made the order they arrived quickly and let me tell you they did not disappoint! I use these for martial arts (Tae Kwon Do) Zumba, and to go from the dojo floor to the shower. Sometimes I go strait from the dojo for a short run and they give me just enough protection without sacrificing ground feel. With a wonderful owner and a great product you will have a dan in me for a very long time

I really loved it!
I’m size 5 US so i chose kids size and it fits a bit larger than my regular size but it was really good
I’m buying another pair soon

These skins are more than you think, not only do they help you stabilize your feet but help keep you grounded. I have issues with balance and with these skins I know I'm not going to slip even if I wobble a little🤣.

Being a Pilates instructor I was going through grippy socks frequently. Socks tend to lose their grip easily after a few washes, yet a good brand is not cheap. I also hated wearing socks with separate toes as my toes would cramp, but my feet would slide around in the regular socks. Solution: Barreletics footwear. I've had mine for over a year and they are still as grippy as ever. My feet stay in place all the time - and I don't have to worry about my toes cramping.I can also wear regular thin socks underneath to keep my feet warm in the winter. They are also easy to clean - just wipe them down after every use!

I found these online, and I thought, just maybe... YES! They allow me to wear my orthotics while doing yoga!
I hate that my pronated feet would make me struggle with balance poses. My feet are hyper-flexible, and the pronation leads to foot cramping, and knee pain as the other muscles try to make up for my flexibility. Most teachers frown on wearing shoes, so here is a way to have your support and work on all parts of the pose, not just trying to stand on one foot!

These shoes are by-far "The next best thing next to being barefoot" that i have found. And i've been searching as long as i've been a practicing member of the "BAREFOOT COMMUNITY", now counting over 10yrs!
I had recently stumbled onto some literature about a totally enclosed silicone shoe at twice the cost, twice as weird and twice the covering which negated the feeling of openess and "bare" feeling i am truly looking for!
As of now i am getting in the habit of wearing them, more so than i like, in as such as being forced to wear some sort of protection when entering a store or going out into our conformest community.

BTW: I refuse to wear shoes, as suggested by my back doctor, in 2008. Which ruins the alignment of ur spine, and changes how u walk also!
And no i will not agree to wear any rubber or hardplatform shoe, which does not feel good and is not good for ur body, from ur feet to ur head! I've purchased every kind of ergonomic, computer designed and optimized P.O.S.there is, known to man. And listen to me when i say "Everyone is not created equal when it comes to shoes!"
Walk around barefoot, 1 whole day, not just at ur home. Take it outside ur "common sense no shoe zone" and u will see what i mean!
As for me, Barreletics has a customer in me, for the immediate present and future!
Or at least until someone invents a better barefoot shoe, that also works like these do in any water or water associated activity!
THANK YOU Barreletics for giving me back my barefoot freedom!

Ideal for Pilates, planning to buy more in the future.!

As someone who works out barefoot for most of my exercise, these “little grippers” are so perfect. They don’t pinch anywhere and provide enough coverage on the bottom of my foot to prevent rug/floor burn. They are a bit hard to get on, but worth it.

Just what I was looking for! Perfect for a fusion class combining elements of barre, yoga, and pilates AND made in USA, sourced in USA, and created by a woman who made what she needed when she couldn't find it elsewhere. Thank you! Shoes are lightweight and clean easily, arrived quickly, and were beautifully packed.

Let customers speak for us

I don’t have to worry about my socks twisting my toes or slipping on the bar at all anymore so I can now concentrate on my breathing more fully. Can’t say enough good things about them. I have the coral/red, white and black. I want the blue but….You can wash with soap and water and a soft toothbrush or roll them in the washing machine. I just got the coral and black ones. I’ve been wearing the white ones for about three or four months and this is how good they look like a little cleanup after. Much easier than keeping track of my socks ;-). 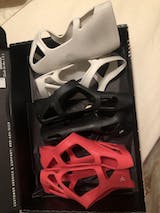 I love these grippy shoes for Pilates! They have a great grip on the reformer and don't slip like socks can sometimes. I purchased a pair after seeing them on my Pilates instructor. Got the coral color in large. Great fit and they are so easy to clean. To me, it means not having to purchase socks and so the expense of Barreletics is worth the savings in the long run. Had lots of inquiries about them when I wore them to class so perhaps more will be purchasing.

Love the quality of the yoga pant and was especially pleased with the customer service and responsiveness to my inquiries.

These are my second pair of Barreletics.
I find that my grip and balance are much better with these skins. I do reformer Pilates along with Trx Suspension classes and these do the trick!.

Great grip from the shoes! Comfortable and light to travel with!